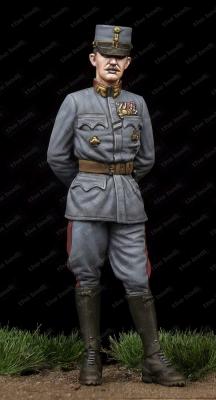 Description:
The most traditional cavalry units of the German part of the Austro-Hungarian Empire were the Dragoon regiments. The distinctive helmet and colourful uniform made their look unmistakable. The 15 Dragoon Regiments were mainly recruited from the German part of the Empire among them were many of Czech origin. This figure is based on Emperor Karl I. (in Hungary IV.Károly) the last emperor and king of the Austro-Hungarian Monarchy. (1916-1918) After his reign he made several visits to all fronts where the K.U.K army fought, which visits were richly documented by photographers. The Emperor wore different uniforms and medals during his visits. This particular figure represent him in field gray uniform with a rank of Feldmarschall, Officer’s cap, and trousers with scarlet red general’s stripes. The figure is available in all popular scales of 1/32 (54 mm), 1/35, 1/48, 1/72. We recommend the marvelous book of Verlag Militaria - Stefan Rest (Editor) The Emperor’s Coat in the First World War which includes thousands of contemporary and up to date pictures of the uniforms of K.U.K. army.